This is a postmortem for the game that I will be posting on May 25th for Towel Day which is the HTML5 port of Towels for Earth. Towels for Earth was a game that I created for a Game Jam back in 2013. The theme of the game jam was towels in honor of Douglas Adams. I suspect that there are several Douglas Adams fans who managed to encounter my Blazing Games site somehow as the polls show that there are quite a few people who wanted to see this game ported to HTML5. It is a fun but short missile defense game where missiles are destructor beams and anti-missiles are towels with the player tossing towels at destructor beams to save the Earth. 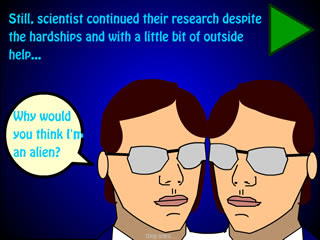 This was a game-jam entry so it was very quick to port over. I had a bit of time left over from what I budgeted so I decided to add some sounds to the game. The original game is in space for which there is no sound, but purists can simply turn the sound off via a nifty sound toggle that I added. The speaker artwork was taken from another game I wrote that had a sound slider but I didn’t have enough spare time to try and create a slider, but that is probably something I should be doing in the future if I ever get enough spare time, which won't be in the next couple of years.

I started going through some of the public domain and royalty free sounds that I have collected over the years to find a few sounds that would work with the game. While some people may not like my choices, I think they work well for the theme of the game. Sound in Create.js is very easy to play if the files have been downloaded which I am using preload.js to do so this was trivial to add once the sound files were found.

I went a bit overboard with the original game and had created a pixel-perfect collision detection routine. This requires the use of bitmap libraries that Create.js doesn’t have and would have been very painful to do – not to mention excruciatingly slow – to do so I reverted to good old-fashioned bounding circles. The wonderful thing about bounding circles is you just find the distance squared between two objects and see if the squared distance is within the combined radiuses. The problem is that if one of the shapes is not spherical, then the collision results can be a bit inaccurate. I don’t really mind too much but suspect that I may hear some complaints about this. I did try to be a bit generous with my circles feeling it is better to have more false positives than false negatives.

The original game used a combination of background images and vector artwork, but I opted to go with all images even though I could have saved a bit of space by using some vector images. The tradeoff of a slightly larger file size for slightly faster game rendering and a easier coding was arguably worth it. The images I did want to have as vectors were actually fairly large so it wasn’t that much space that I was using. My original plans were to have the backdrops converted into a separate jpeg file while the other parts were stored in a png file so I could get a bit better compression. When using my image view to see how different compression ratios would affect the image quality, I noticed that the images looked pretty good when converted to 8-bit png files with only a small increase in file size so I put all the images into a single image atlas.

For people who still have slow internet connections, these decisions may have resulted in longer loading times. For that I apologize as I know most people with slow internet don’t have a choice in the matter.

Overall, I am happy with how this game turned out. Sound does add a bit to the game, but sound and music is my Achilles heel. I really have to start trying to add more sound to my games in the future.
Posted by Billy D. Spelchan at 7:53 PM No comments:

With my being accepted into a Master of Science in Computer Science program I will be extremely busy for the next couple of years. I do want to keep up with my site, which is not that time consuming if I predominantly post ports of the games from Blazing Games so both this blog and my homebrewgamejam.blogspot.ca blogs will continue while I am in university. The frequency of the updates is going to be shifted from weekly to alternating between the two blogs with each having an article posted every other Saturday. If things get too hectic, I may cut back to a monthly update but am going to allocate a block of time towards the site and blogs so that things will continue unless something bad happens.

My Easter Egg generator is not really writing a postmortem for. While I did learn a bit about color filters while creating it, this is not enough to warrant a full article.

This month is seeing the release of two games. The first being the HTML 5 version of Four in a Row which is not a new port but does need to be transferred over from the Blazing Games site eventually and as towel day is so late in the month why not this month. The original version was still rough so I decided to clean up the AI a bit and to add animation to the game. There is still a lot that I would like to add to the game before I would consider it to be complete but not sure when I will find time to do that so it may be a decade before this game is properly completed.

Towel day will be the release of my Towels for Earth port. However, I will be posting the postmortem of the game before the actual release of the game. That will be the topic for next fortnight’s post after which I will start posting Chapter 4 of my Animate CC eBook.

Fleet, which I was planning on posting in June, is not quite ready. If it is not ready in time I may post a different game in it’s place but hope to have it finished. If the game is not ready by the 25th then I will go with an alternate post. Either way the site will have information about what I am going to post. If the game is delayed, it will still be worked on so will be posted later in the year.

July's game will be released on the 13th of the month as that month has a friday the 13th. It is going to be 13^2 Spikes. August is String Along, but I may substitute it for Fleet if a delay is required.September is when CQ is finally suppose to appear but if things go as planned there may be a bit of a surprise with that release.
Posted by Billy D. Spelchan at 8:08 PM No comments: