While NIM is a very simple game, it is a good game to start learning game development with. The game is very straight forward in its presentation. The rules of game play are very easy to implement. Most importantly, at least for beginning Animate developers, the game requires only a minimal amount of JavaScript.


While I personally have no problem with JavaScript, I know a lot of Flash and now Animate developers who fear scripting languages. Games, by their interactive nature, require scripting. There is, however, no need to jump right into extensive JavaScript use. Our first project will attempt to keep JavaScript to a minimum.


We already know what the game is about from the description in the previous section, so what is needed is specific details on the game. There are three things that must be decided. What is the object that is being removed, how many objects are there to be removed, and how does the player remove them?


All of the questions can be answered pretty much any way the designer wanted and the game will still work fine. For the object, anything could work, though I look at the object as something valuable that the person would want the last one. To me I think of jewels or gems when I think of something valued. The reason that gems are valued is because they are rare. The bigger the gem the rarer it is. This means that if the last gem is a big gem then it is a very valuable gem.


The number of objects is simply a matter of how many can fit on the screen. Four rows of ten seemed to make sense, so for this version we will have 40 gems. This would also leave room for a space where the user could specify how many gems to take. As the only interaction the user has is select how many gems to take, the user interface is simply three buttons, with a text area to describe what is happening.


Using buttons to remove the gems is not the only way this could have been handled. An alternative interface would be to have the player click on the gem to be removed. This would be intuitive, especially if the allowable selections were highlighted in some way, but without use of JavaScript would be a huge amount of work.
Posted by Billy D. Spelchan at 10:20 PM No comments: 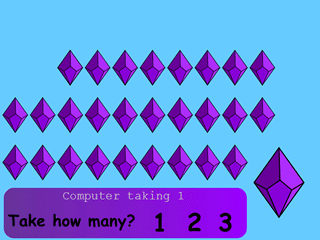 Posted by Billy D. Spelchan at 8:37 PM No comments: 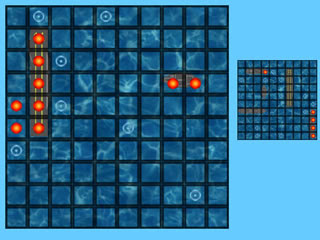 Posted by Billy D. Spelchan at 6:41 PM No comments: