In the flash version (as well as my original draft) of this book, the adventure game material was near the end of the book but as the game is fairly simple from a programming perspective, I have decided to move it to here. Nightmare Maze is actually the first episode of a 46 episode series called One of those Weeks, which I hope to be redoing using a 3D engine sometime in the future.

In "Planning the Adventure" we take a look at how the game was designed. Adventure games tend to break areas that the player can visit into rooms, with the word room being a generic concept so outdoor areas are also referred to as rooms. For this game, all the rooms in the game are in fact rooms so the next step to the creation of this game is "Building the Rooms" which covers the techniques used to build the rooms used in this game. While it is a little but unconventional, it works for this game and the basic concepts are the same for other adventures.

While it is possible to have an adventure game that exists in a single room, such as a puzzle room, our game requires movement between rooms. I am not taking about adding doors to the room, though they are what the players use, I am taking about the underlying code for moving players between rooms. This is covered in "Linking the rooms"

While mazes are often enough, for this game we have a villain, who also happens to be in all the other dream sequences in this series, so in "Enter the Nasty" we cover the mechanism for getting the villain to appear. This obviously leads to "Losing and Winning" where we cover how to handle the nasty getting the player as well as the opposite but related player escaping from the nightmare.

With the game finished, this only leaves "Final Touches" where the title screen for the game is added. This covers what we will be doing over the next six fortnights, but the game is already on Spelchan.com so feel free to play the game while you wait for my sections on how the game was created. 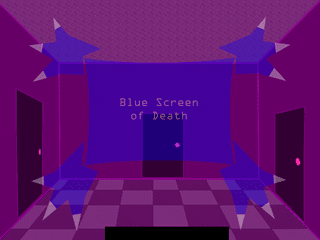 Posted by Billy D. Spelchan at 8:29 PM No comments:

It has been no secret that the Blazing Games site is going away in April. This may lead to the question about what I am going to do with this blog after the site shuts down? I have been thinking about dropping this blog keeping only my Homebrew Gamejam blog but I am slowly porting the Flash and Java games from BlazingGames into HTML5 and hosting the new versions on Spelchan.com. There are a lot of games that I had created on BlazingGames so this process will take a very long time so it makes sense to continue to keep this blog running. Besides, I have to finish posting the chapters from my Making HTML5 Games using Animate eBook.

I will continue posting the sections of the book each fortnight with updates on game ports made between the chapters. In addition to Spelchan.com, I also have my 2600Dragons.com and will soon have TarotRevealed.com which is where I plan on hosting my tarot games. There are a lot of pages that make up the site as well as a lot of features that I would like to add to the site so this is going to be a process that will take a fair amount of time. I am going to spread this work out adding new layouts or features every month with the site being updated on the 15th of each month.

Right now I am running into some issues setting up the site (adding it to my hosting is still pending) but hopefully the site will show up shortly and I will be able to have the first version of the site ready by the 15th of this month.

I would like to be porting games much quicker than I currently am but at the moment am working on my Masters degree so my spare time is very little. The few hours a week that I allocate to working on both blogs, porting games, and developing my emulator should probably be used for study but I consider this my time so try to allocate some time for these projects. Naively I was hoping to get ahead of the release schedule so that I wouldn’t need to worry about hitting release dates but that has not been the case. My summer schedule is lighter but as we are expected to work on our thesis at that time I suspect that my tune situation will be just as bad in the summer. The Coffee Quest engine isn’t too bad so I should have no problem releasing content for that series but I was really hoping to do my revamped One of those Weeks and Ultimate Retro Project games.

Needless to say, my focus for the larger project will be Coffee Quest  and once that project is done I will have to make a decision between Ultimate Retro Project and One of those Weeks. What I want to do with OotW is very time consuming but I should be finished my Masters degree so unless I decide to go for a PHD I should have more spare time. More on this once I have finished posting the next chapter of the eBook, which will be starting next fortnight.

Posted by Billy D. Spelchan at 6:59 PM No comments: