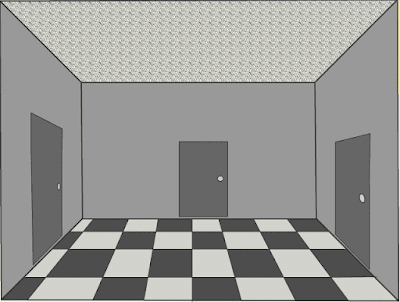 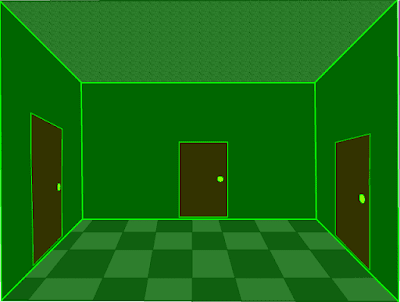 Posted by Billy D. Spelchan at 7:52 PM No comments:

The basic theme behind nightmare maze is that you are lost in a maze and must move quickly from room to room before the evil Blue Screen of Death reaches you.  The maze in this game is consistent in the fact that the same door will take you to the same room, however it is not commutative meaning that the door from A to B does not necessarily go back to A. This means while there is a structure to the maze it works different then the real world, which is typical of dreams.

Mazes are fairly easy to implement. This maze, however, is not a linear maze. With a linear maze, you can use graph paper to plan out the maze. This is obviously not the case with a non-linear maze. Instead, a different type of graph is used for creating a non-linear maze. This graph consists of the rooms drawn as boxes with arrowed lines showing how the rooms connect. I used a variation on this having colored lines corresponding to the room the line is from. 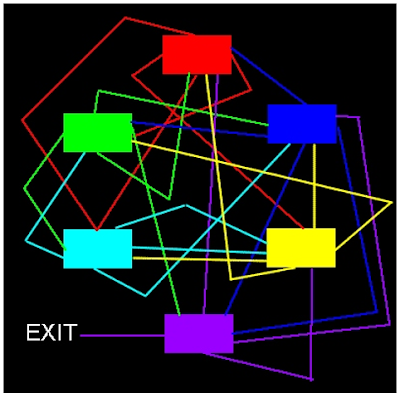 As you can see by the above map, the links between rooms are fairly complex. However implementing the links is actually very easy. You can also see that there are a lot of ways of reaching the exit, but do to the fact that there is nothing highlighting the exit, a player could end up being stuck in the maze for quite a while.

The room approach is very common in adventure games as travelling between locations is a very common activity. Generally, when designing an adventure game, each location will be considered to be a room even if it is an outside location. This allows for rooms to be worked on independently of each other and for earlier computers that had a very limited amount of memory would allow for the computer to only have to load the drawing data for the room that the player was currently in then having some type of transition animation between "rooms" when the player left a room and the game had to load in the image for the next room.

From a programming perspective, having rooms that are connected together with lines allows us to represent the map as a mathematical graph in which each room is a vertex of the graph and the connections between rooms are the edges of the graph.  Graph theory, however, is not necessary to build an adventure game. All that really matters is that you are able to create a basic map of the locations within the adventure so that you can move between them. The map can also be used to plan out where objects are located in the world and what obstacles or puzzles there are in the game. This allows for a walk through of the game before you have even started any real work on building the game so that you know that the game is solvable.

Once the map is planned out you then have the ability to itemize all the assets that will be needed for the game and can start work on building the art needed for each of the rooms. Building the rooms is what we will be doing next fortnight, but thanks to the nature of our maze this is a lot easier for this game than it would be for most other adventure games.

Posted by Billy D. Spelchan at 7:58 PM No comments: