Now that we have an ASCII character set, we are now ready to display something. The display memory is broken into two parts called the NAME table and the ATTRIBUTE table. They are paired together and the NES supports up to four of them. The NAME table is a 32x30 grid of bytes that store the indexes of which characters to display.  The palette used to display the character is determined by the ATTRIBUTE table. This is where things get really confusing.

There are only 64 bytes of attribute memory yet 32 x 30 = 960.  there are only four palettes so only two bits per tile are needed. Even then, there is only enough memory for a quarter of the display. The obvious solution to this problem is to group the tiles into 2x2 blocks that share the same palette. This is what is done, but instead of storing the colour information consecutively, the PPU groups 2x2 blocks into another 2x2 block as shown in the figure below. 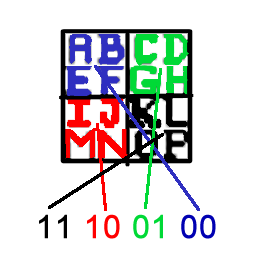 Up to four screens can be set up, but the NES only has enough memory built in for two screens. Additional RAM can be added if four way scrolling is required, but many games only need horizontal or vertical scrolling. If addition NAME/ATTRIBUTE table memory is not present, the missing memory is mirrored copies of existing memory based on the scrolling mode that is set.

The easiest way of thinking about the four screens is to think of them as a 2x2 grid of screens. You then set the pixel position of the display which determines which parts of the four screens are displayed.

Now that we have an overview of what is required to display a piece of text, we are ready to create a hello world program which is what we will be doing next.
Posted by Billy D. Spelchan at 8:45 PM